Zhan Zhuang is the Chi Kung system with the longest tradition which can be traced back 27 centuries. It is the foundation of all Chi Kung styles and is characterised by its great effectiveness and efficiency. Zhan Zhuang is pronounced "Jan Jong", or in Southern China, "Jam Jong" and is best translated as Standing Like A Tree,

For most people, training in Zhan Zhuang is a complete surprise in the beginning. There are no recognisable external movements, although it is a highly energetic exercise system. In contrast to many other methods, Zhan Zhuang develops our internal energy in a very efficient way, instead of consuming it.

Zhan Zhuang Chi Kung is practiced in well-balanced standing positions which increase the flow of energy and build up internal strength. The Zhan Zhuang system is based on a unique fusion of relaxation and exertion which stimulates, cleanses and massages the whole body.

Because Zhan Zhuang is so effective in raising our energy levels, it is often used as basic training for martial arts.

For a long time, Zhan Zhuang Chi Kung has been a well kept secret. It is only since the mid 40s of the last century that Zhan Zhuang has been taught and discussed publicly. In Europe,  Master Lam Kam Chuen introduced this unique Chi Kung system in 1987. He is also the author of the first book on Zhan Zhuang in the West.

Through the practice of Zhan Zhuang Chi Kung we're able to take advantage of our whole potential - physically, mentally and spiritually - without becoming exhausted. This is achieved in a completely natural way without the need for fighting ourselves. 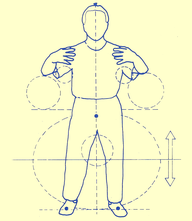 When you stand, you are like a tree.
You are growing from within.
Your feet, like roots, draw power from the earth.
Your body, like the trunk, is perfeclty aligned.
You are unmoving, strong.
Your head is open to the heavens like the crown of the tree.
You rest calmly, the universe within your mind.