Ba Duan Jin, the Eight Strands of Brocade is a popular set of exercises for toning up the internal organs and systems. It is practiced by Chinese people all over the world.

Each of the eight Ba Duan Jin exercises intensifies the flow of energy along the full length of specific meridians. Thus the complete set of exercises benefits the whole energy network, including the internal organs through wich that energy passes. Regular practice is the ideal preparation you need to carry the "awakened dragon" of your Chi.

Like all popular traditions, the origins of Ba Duan Jin are shrouded in myth and legend. Some say the exercises began several thousand years ago.

The most recent evidence of the long history of these movements comes from a silk book unearthened in 1979, known as the Dao Ying Xing Qi Fa (Method of Inducing Free Flow of Chi). This book dates from the Western Han dynasty (206BC to AD23) and shows 44 drawings of men and women in exercise positions resembling Ba Du Jin as it practised nowadays.

It is known that General Yeu Fei who lived during the Southern Sung dynastie (1177 - 1279) developed a set of twelve fundamental exercises to train his army. These he later simplified to eight - Ba Duan Jin. The fact that he and his army were never defeated in battle was attributed to his training.

To this day, visitors to the famous Shaolin Temple in Henan, China, will see statues of monks performing Ba Duan Jin. The monks themselves who are living at the temple use this system as part of their daily training. 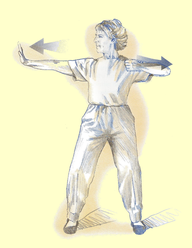 The second Ba Duan Jin exercise:
Drawing a Bow to Each Side Resembles Shooting an Eagle